Still Rocking It After Cancer

Still Rocking It After Cancer

Paul West made a living in the 1970s and 80s playing keyboards in bands in Texas that covered pop, country and rock hits of the day. He toured the country for a while but eventually took a different path at around age 30. He got married, had two children, went back to school and got his PhD in chemistry. Still, his love of performing never left him.

He wound up in living in Arena, Wis., leading science research projects as a director of  bionanalytical chemistry for a Madison biotech company. In 2012, after a 25-year hiatus from music, he joined—The Retro Specz, a classic rock cover band that plays 40 to 50 shows per year. “We play at festivals, bars, weddings—whoever will have us. We just rock it out. Summers are particularly crazy. I’m getting a little old for this,” he says with a laugh.

In the summer of 2016, at age 62, his music and his life had to be put on hold during treatment for, and recovery from, a cancer arising at the back of his tongue. He was diagnosed earlier that year after he couldn’t shake the sensation of something stuck in his throat. A swallow study—a test that uses X-rays and barium to capture the motion of the throat and esophagus while swallowing—indicated a swelling at the base of his tongue. A CT confirmed the presence of a one-inch tumor that tested positive for human papilloma virus (HPV). Fortunately, it had not metastasized.

“I was unhappy, and I was worried, especially when I was first diagnosed. I think if I were younger, I would have been more upset about it,” West says. “Of course I was upset, and my family was upset and crying a little bit after diagnosis. But I was 62. I’ve had a great life.”

West underwent treatment at UW Carbone Cancer Center, which included radiation therapy and chemotherapy (cisplatin, to help the radiation work better). He had difficulty with treatment. The cisplatin caused a low white blood cell count. The radiation made eating impossible, which disrupted his electrolyte levels, causing severe weakness and light-headedness. Four weeks into his seven-week treatment, West was admitted to University Hospital, where he stayed for 10 days. He continued radiation therapy but had to stop chemotherapy. He had a feeding tube installed to allow him to get adequate nutrition and hydration. He also suffered from extreme fatigue as a result of the radiation and spent the summer of 2016 on his basement couch. “Imagine the worst flu of your entire life. You know that feeling that you just can’t get out of bed—like you’ve been hit by a truck? It feels kind of like that.

“As I went through the chemo and radiation and felt like I was going to die, I got more emotional. I was all screwed up,” West says. “When my wife would have to go to work, I would be begging her not to go. I said, ‘Please, I don’t want to die today’ and she was like, ‘You’re not going to die.’ And I said, ‘Well, I feel like I am.’”

He and his wife managed his complicated treatment regimen. “Treatment completely destroys your daily routine and is exhausting. You’re up half the night changing feeding bags or taking meds—wake up at 2 a.m. to take this med, wake up at 4 a.m. to take this one,” West says. “Having someone to help is really important for both physical and emotional support. I had my wife to help me—we’ve been together 35 years. She was great. She put up with all this stuff.” 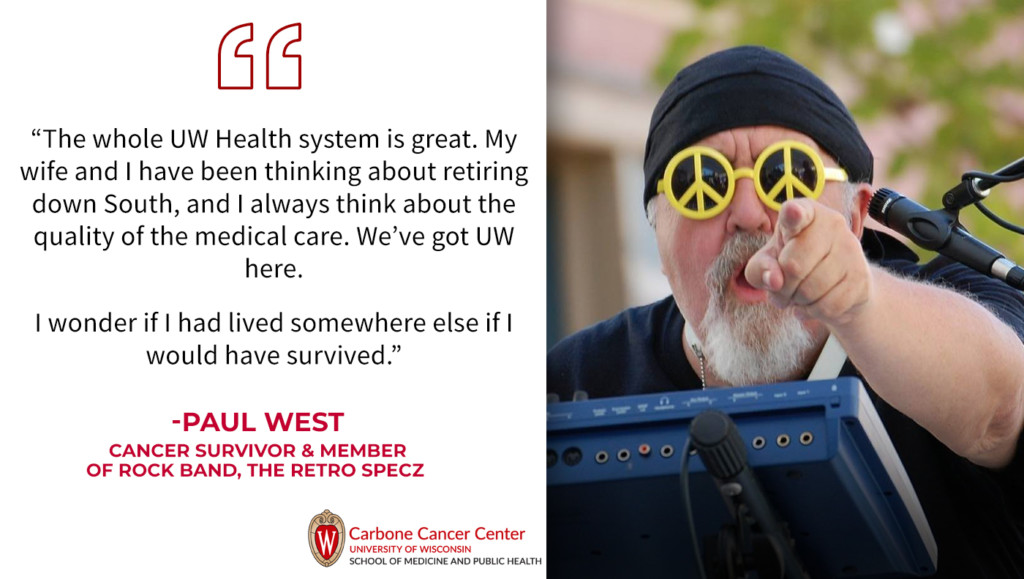 West also praises his treatment team, especially Dr. Randy Kimple, his radiation oncologist at the UW Carbone Cancer Center. “Randy told me, ‘I want you to get this many calories a day, so make it happen. You have to do this.’ He’s a great a doctor—very nice and a cool guy—but he’s tough too,” West says. “Every time I go see Randy, I’m like, ‘Dude, thank you. I appreciate everything you’ve done for me. You saved my life.’

“The whole UW Health system is great. My wife and I have been thinking about retiring down South, and I always think about the quality of the medical care. We’ve got UW here. I wonder if I had lived somewhere else if I would have survived.

“UW research faculty and personnel are highly motivated and they’re on the cutting edge. I think that’s important when it comes down to patients like me. They have a more innovative attitude, whereas if you’re treated where they’re not also doing research, you might not have that.”

West cites the Accuray TomoTherapy radiation therapy technology used to treat him as an example of a University of Wisconsin innovation that has improved cancer treatment. This system uses CT imaging to ensure precise targeting to deliver the maximum dose to the tumor while sparing healthy tissue.

Research funding is an essential part of innovation. As a scientist, West knows firsthand how expensive research can be and how difficult it can be to obtain funding. While most research funding comes from government agencies, private funding is also important, he says. “When you have funding from the government, sometimes there are more strict requirements, and that is not always conducive to very innovative and creative research. You can be a little more creative with private funding.”

A growing source of funding for UW cancer research is The Ride, a cycling event that has raised nearly $1 million in its first three years. West sees The Ride as a great way to generate funding for innovative research to improve treatment outcomes and lessen treatment side effects. Perhaps most importantly, he says it can build community among cancer patients, their families, and the general public and raise awareness about treatment and prevention. He’s a strong advocate of educating the public about getting vaccinated to prevent HPV infection— now the leading cause of cervical, head and neck, anal, vulvar and penile cancers.

Three years after his diagnosis, West is doing well. He is “semi-retired” and does some analytical chemistry consulting work. He is also back with the band. “They wanted me to come back and kept my spot open for me. They’re really great people. We get along really well and have a good time,” he says.

West continues to have some lasting side effects from treatment, including lymphedema in his throat, some salivary gland malfunction, changes to his sense of taste, jaw cramps and gustatory perspiration—nasal discharge and sweating when he eats spicy food. But he has come a long way since completing treatment.

“I know my throat is never going to be same,” West says. “When I first went back to play with the band, I couldn’t sing some of the parts I used to sing. I’m not a lead vocalist, but I sing a lot of harmonies and I couldn’t hit some of the high notes. But as the years have gone by, I can actually hit the notes. My vocal range was a measure of how my healing was going. One day, a member of the band heard my range improve and said, ‘Whoa, you can hit that one again!’ That’s pretty cool.”

Made Possible By Our Generous Sponsors